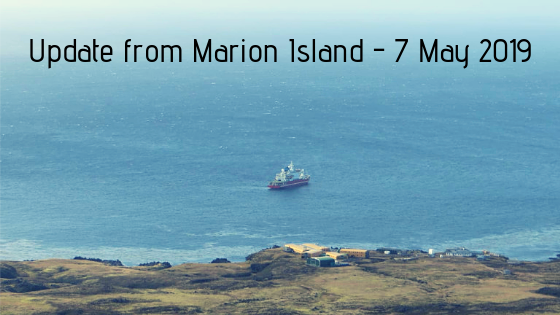 Time on the island is rapidly running out for all passengers returning to Cape Town, this includes everyone except the 76th Marion Island Overwintering Team. The take-over scientists are wrapping up field work and packing containers for back-loading  started at this research station.

The first containers were transported to the research and supply vessel, S.A. Agulhas II. Watch the video below to see how a container is transported by helicopter.

These last few days are bitter sweet on the island. The 75th overwintering team returning to Cape Town have to say goodbye to the place they called home for 13 months. A place that was at first maybe something to get used to, and now a very special memory that will last a lifetime. For many this might be the last time they get to visit this pristine island in the Southern Ocean, but for the 76th overwintering team the departure of the vessel is something to look forward to, as they will be able to unpack their personals in their own rooms and settling in, preparing for the year ahead.

The vessel is expected to depart from Marion Island on the 9th of May and the expected time of arrival at East Pier, Cape Town Harbour, is 16 May 2019. The longer return voyage will be used toward oceanographic research on transects between the Prince Edward Islands and Cape Town.

Posted by Ultimate Aviation Group on Tuesday, 7 May 2019