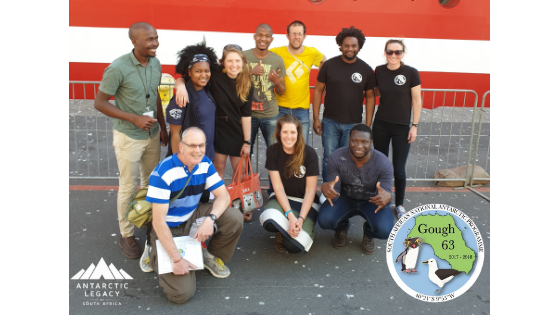 The team that departed last year September has arrived in Cape Town on the 13th of October 2018.

This team had a successful year on Gough Island with no serious issues and injuries. They disembarked the ship with high spirits and some even talking about returning to the island in the near future.

With the initiative of mainly two team members, Kate Lawrence and Jaimie Cleeland, the team compiled a book with all their favourite recipes used to fill their tummies during their time on the island (Click here to read more about this initiative).

We welcome the team back and we wish them well. We do hope to see you back in the near future.

Follow ALSA on social media to stay up to date with current happenings within SANAP:

Posted by Antarctic Legacy of South Africa on Saturday, 13 October 2018

Before and after at East Pier, Cape Town Harbour. She is back after the Gough Island take-over voyage. #saagulhas2 #GoughIsland #tristandacunha #Gough63

Posted by Antarctic Legacy of South Africa on Saturday, 13 October 2018