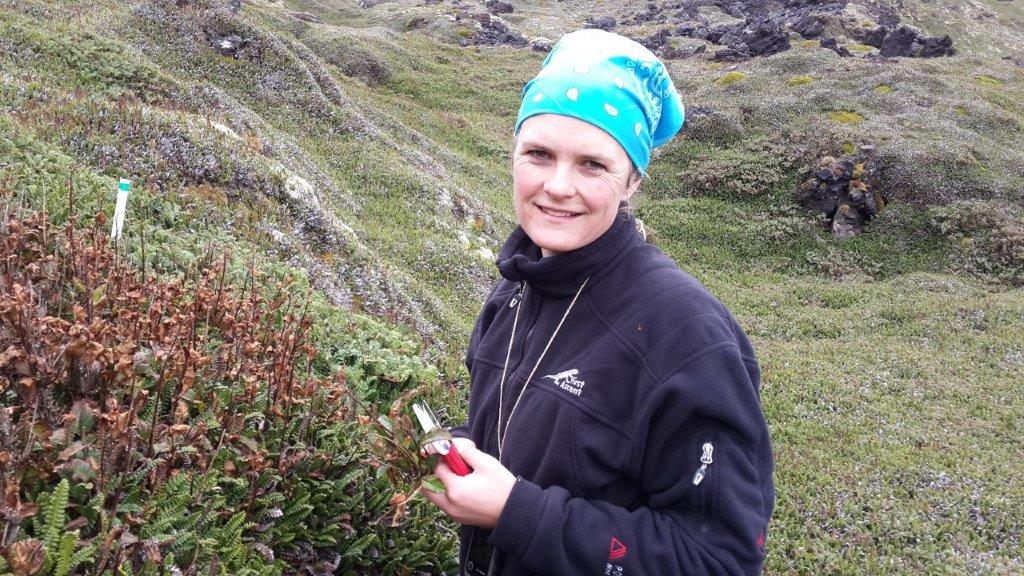 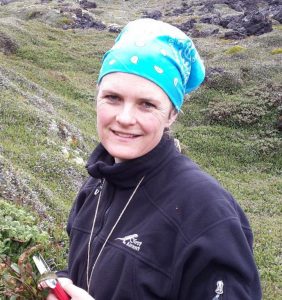 I grew up in Hermannsburg, a small village in KwaZulu-Natal, which has a school, lots of space to roam and explore, and not much else. Growing up outdoors (and having a passionate biology-teacher-father) sparked my interest in the natural sciences – and I have had the privilege of pursuing a career in the field. I completed my undergraduate degree at Stellenbosch University.

In my third-year I saw an advert for a Marion Island-based honours project being advertised by a new lecturer in our department, Steven Chown. From a young age I had had the dream of visiting the island, so I had to apply for the honours position for the chance to visit the island! And visit the island I did – for a four-week take-over during my honours year. This was a seminal experience for me: I had never been to a place so remote, so wild, so volcanic (and so windy and cold)! Also, I got out of the year more than a visit to Marion Island; I was exposed the field of biogeography: the study of how biodiversity is distributed in space and time – a new interest developed for me. 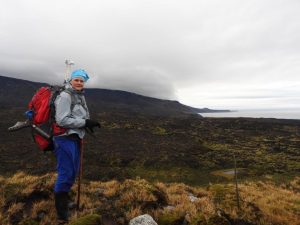 I continued pursuing an MSc and PhD in the biogeography of birds and plants in Africa: somewhat warmer and greener places (I completed these degrees in Stellenbosch and in Denmark respectively). Here I developed my second passion: savanna ecology. After taking up my position in the Plant and Soil Sciences Department at the University of Pretoria in 2013, I had a renewed opportunity to get involved in the sub-Antarctic sciences when I was awarded a SANAP grant.

Much of the work that we have been doing on Marion Island deals with invasive species (especially plants) and what determines their distribution and success. Even though sub-Antarctic islands like Marion Island are some of the most isolated places on Earth, they have not been totally spared from human activities. Invasive species constitute one of the largest threats to the islands. These have mostly been introduced accidentally in e.g. building rubble, stuck in people’s shoes or the Velcro of their jackets, or in food supplies. Not all exotic species that have arrived at the islands have survived, but those that have, have often managed to spread and in some cases have had large negative impacts on the native species and ecosystem. Additionally, Marion Island is rapidly warming, and this is benefitting invasive species which are able to better survive under the mild conditions. How invasive species will be affected by climate change compared to native species forms a further particular interest. There is already some evidence of invasive species benefitting more than native species; but together with Prof Michael Cramer from UCT and Brad Ripley from Rhodes University, we are also studying how factors other than climate, e.g. soil characteristics, may limit the spread  of invasive species, even under climate change. (image below during The POLAR2018 symposium in Davos, Siwtzerland) 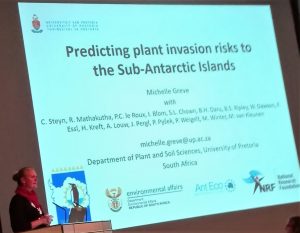 There are many things I enjoy about my career. I am always learning more, and by conducting research, I am also contributing to new knowledge. As an ecologist, I enjoy the opportunities to see wild places all over South Africa and beyond, to understand how they function, and to hopefully contribute to their protection and appropriate management. I have also met, and made friends with, many wonderful, kind and intelligent people through my work. I especially enjoy the interactions I get to have with students: it is rewarding to see them develop skills and self-confidence, and learning from them as people who possess different world views from me, have skills different to mine, and in many cases overtake me in their scientific skills and knowledge.

“A research career is a varied and fulfilling career. Science can be used to make evidence-based decisions to improve society, and it accommodates many different ‘types’ of people: good writers, geeks, extroverts who can communicate science, teachers, modellers, outdoor-types, etc. A career in science will usually not make you very rich nor be without stress: it is competitive, often requires long hours and perseverance, and requires the scientist to excel at many different things and juggle several balls at once. However, the life of a scientist is interesting!”