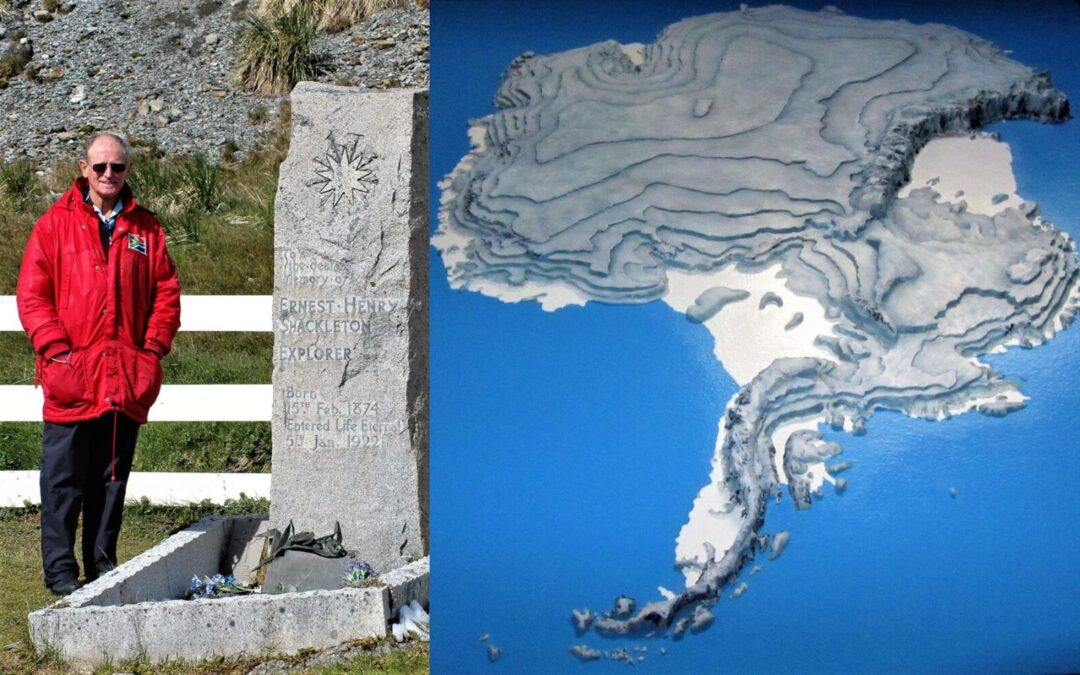 Sydney Cullis’s hobby turned out to be a bonus for the preservation of the Legacy of South Africa in the Antarctic region. ” It all started in 1993 when our son, James, was in Matric he had to produce a talk for one of the school societies and, as the Fiennes/Stroud “In the footsteps of Scott” expedition to cross Antarctica unsupported was in the news, he decided to choose it as his subject. To provide him with some guidance I started reading about the history of Antarctic exploration – and the more I read, the more fascinating I found it – and the more South African connections I came across. I was probably more receptive than I might otherwise have been as the first film I ever went to see (aged 6) was “Scott of the Antarctic” in 1948 and I have never forgotten the haunting soundtrack music of the Vaughan Williams’s 7th Symphony as they struggled up the Beardmore Glacier. 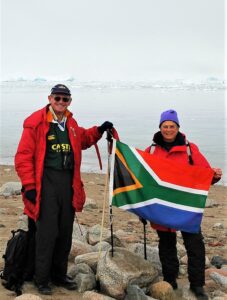 Sydney and Catherine at “furthest South” 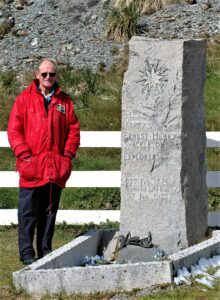 Although born in Pretoria, I was at school and university in Cape Town. My surgical training started with internship at Groote Schuur Hospital and I was then fortunate to spend time in Zimbabwe, London, Edinburgh, Durban and, by then married to Catherine who I met in the pub after a hockey match in Durban, we returned to Cape Town. In 2007 , as per our partnership agreement, I retired from the practice but continued to assist my partners in theatre – and also celebrated my semi-retirement by undertaking a cruise from Ushuaia in Argentina to the Falklands, South Georgia and the Antarctic Peninsula as far as Petermann Island, just north of the Antarctic Circle. As a result of the Covid-19 pandemic I have now retired fully as it is recommended that surgeons over 60 should stay out of theatre. 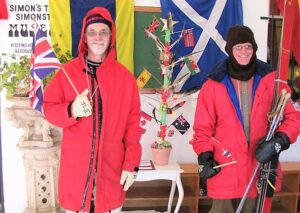 We visited the UK in 2008 and with my newfound interest in Antarctic history I contacted the Scott Polar Research Institute in Cambridge about the possibility of looking for further South African connections in their archives. Bob Headland, then the Director, replied with an invitation to visit them and he recommended that I read an article he had written on the very subject – “A history of South African Involvement in Antarctica and at the Prince Edward Islands” which to this day is still the definitive article on the subject. His co-author was John Cooper – and it was only when I returned home that I discovered that he was the same John Cooper that I’d been running with three times a week for several years – and was instrumental in the start of ALSA. I was totally unaware of his interest in, and wide knowledge of, Antarctic history and, needless to say, over the years since then we have continued to run together and John has passed on a wealth of information to me.

Initially my interest was in trawling through the published accounts of the Heroic Era expeditions for South African connections-and discovered that, not only did many of the expeditions use Cape Town or Simon’s Town as a revictualling port, but many of the members of those expeditions had spent time in South Africa either before or after their visits to Antarctica – Maclear (Challenger), Scott, Shackleton, Wild, Joyce, Ferrar (Discovery), Pirie (Scotia), Davis (Nimrod),Oates, Mears (Terra Nova), Gray (Aurora)and James (Endurance) are some of them. As I delved deeper into the subject, I realised that it was part of our history that was not well known here in South Africa. The only visible evidence of this that I was aware of was the Scott Memorial near to the fountain at the bottom of Adderley Street and a small display on Marion Island at the Iziko Museum. 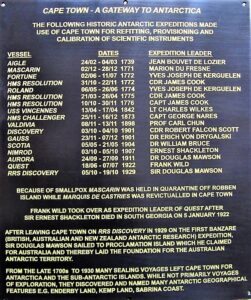 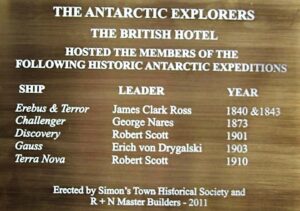 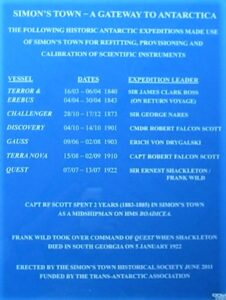 (Above: Cape Town Plaque,  Plaque outside British Hotel and at Jubilee Square, Simon’s Town) I therefore tried to find ways of highlighting the concept that Cape Town and Simon’s Town were “Gateways to Antarctica” – by creating presentations to historical societies, U3A’s, UCT Summer School, and Ship Societies both in Cape Town and Durban. I also facilitated the erection of plaques listing the Antarctic expeditions that passed through Simon’s Town in Jubilee Square and the British Hotel there. Another plaque containing the list of the 17 historic Antarctic expeditions that had made use of Cape Town was made with a view to it being erected somewhere in the V & A Waterfront – but unfortunately it is still gathering dust somewhere there. 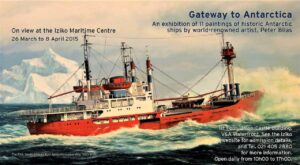 Another source of information has been the study of newspaper reports of their visits – thanks to the South African library. One such report on the departure of Aurora from Cape Town in 1911 mentioned how one of the huskies had fallen overboard and had been rescued by a passing dinghy. This enabled the episode to be recorded in a painting of her departure by Jeremy Day which was commissioned to celebrate the centenary of Aurora’s visit to Cape Town. In 2015 John Cooper had alerted me to the risk that the series of Peter Bilas paintings of Antarctic ships on SA Agulhas I might get lost or damaged when being transferred to the new S.A. Agulhas II. We therefore arranged for them to be restored (sponsored by GAC Shipping) and exhibited in the Iziko Maritime Museum at the V&A waterfront.

The Commonwealth Trans-Antarctic Expedition of 1955-8 was the first to cross the continent from the Weddell Sea to the Ross Sea – which Shackleton had failed to do in his Endurance expedition of 1914-17. The meteorologist on that expedition was Hannes la Grange, who thereby became the first South African to reach the South Pole and in 1959 he was appointed leader of the first South African expedition to Antarctica (SANAE 1).  The surplus after the expedition established a fund and each year, as a result of Hannes’s participation, South Africans are able each year to apply for a grant for Antarctic research. In 2010 I applied for, and received, a grant which enabled an Antarctic display to be established at the Simon’s Town Historical Museum. Last year a poster entitled “Simon’s Town-a Gateway to Antarctica” was added to the Wall of Memory in the centre of the town(Top image with Sydney Cullis). 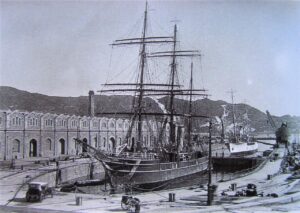 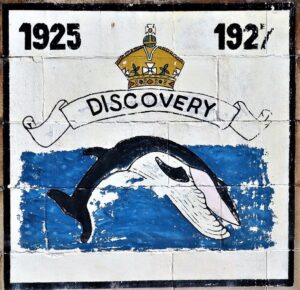 I have enjoyed the opportunity whenever Antarctic historians have visited Cape Town to show them our “Antarctic sites” – most memorably when showing Bob Headland around Simon’s town we discovered that Discovery’s badge had been added to those on the wall of the Selbourne drydock. Discovery had undergone an extensive refit in 1926 in the dock prior to her departure on a research voyage to South Georgia which paved the way to the international ban on whaling enacted in 1936 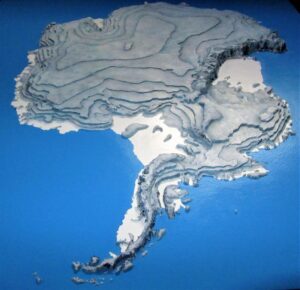 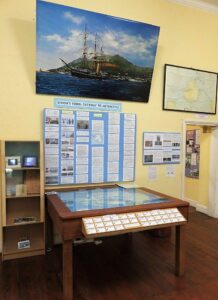 (above: Display at Simon’s Town Museum) The significant anniversaries of the historic Antarctic expeditions have been useful to raise awareness of them in South Africa. In December 2021 it will be 250 years since Marion Dufresne spent a month in Cape Town prior to his re-discovering the island which now bears his name and, as a result of its annexation 1947-8, it is an integral part of South Africa. We hope it will be suitably commemorated. Having a niche interest such as this has provided the opportunity when travelling away from Cape Town to search out items of Antarctic interest – (article on ALSA repository) I have been very fortunate to have been afforded the opportunity to develop a new interest/hobby which has resulted in my meeting so many very helpful individuals. I hope that it may have generated a more widespread interest in this relatively unknown facet of South African history.” This is definitely a field where research in the humanities and history of South Africa in the Antarctic can be done.