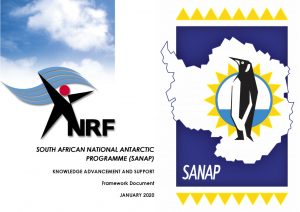 SANAP is a region-specific, theme-driven funding instrument which supports research in the Southern Ocean, including the Prince Edward Islands, and in Antarctica. As a competitive funding instrument, the chief eligibility criteria are:

SANAP research addresses the research themes detailed in the South African Antarctic and Southern Ocean Research Plan (2014-2024), and is underpinned by the overarching South African Marine and Antarctic Research Strategy (MARS) of 2015. The Antarctic and Southern Ocean Research Plan (hereafter “the Research Plan”) is focused on an integrative systems approach to understanding the evolution of the earth systems and ecosystems in the 21st Century. The Research Plan provides the overarching framework of operations for SANAP research activities, and follows the integrated progression from Earth Systems to Ecosystems to Human Systems in the research themes. Human activities and socio-political complexities in this international arena are of equal importance.(1).

Social Sciences, Law and Humanities applications are especially encouraged, as are applications addressing innovation. Each research theme has a number of sub- themes, and applicants are strongly encouraged to familiarise themselves with the thematic focus of the Research Plan, as well as with the overall strategic context provided in the MARS (both attached hereto) so as to ensure that their applications meet the very specific scientific and strategic objectives of this funding instrument.

The National Research Foundation (NRF) recognises that in order for South Africa to be internationally competitive and to meaningfully contribute to the global economy, the country must have the capability to understand the knowledge produced by others. This understanding can best be developed through performing research. Publicly funded basic and applied research is viewed as a source of new ideas, opportunities, methods, and most importantly, the means through which problem solvers can be trained.

The South African Antarctic and Southern Ocean Research Plan (2014-2024) serves to link South Africa’s comparative geographic and research advantage, regional stewardship and national interest considerations to research themes so as to stimulate systems scale integration of knowledge and understanding. This will not only strengthen South Africa’s profile and develop advanced skills, but in so doing will also support the Country’s geo-political and citizenship goals in both regional and global dialogues. The importance of South Africa’s geographical proximity to Antarctica and its position as a Southern Ocean2 littoral State cannot be overstressed.

The country runs the risk of not fully utilizing or maximizing the benefits from this geographic advantage, owing to a lack of adequate human capital. This includes the risk that the country may own research platforms and facilities, but could be subject to a form of “knowledge colonization” from international quarters, many of whom already possess a critical mass of requisite skills. The SANAP is a long-term funding instrument designed to ensure the creation of a demographically balanced Antarctic research programme that strives for internationally competitive research, promotes inter-disciplinarity and creates links with other African countries.

(2).This area includes the Prince Edward Islands over which South Africa exercises undisputed sovereignty. The Southern Ocean is defined as the region south of Africa comprising the ocean and the sub-Antarctic Islands up to, and including, the Antarctic Continental Shelf Zone.