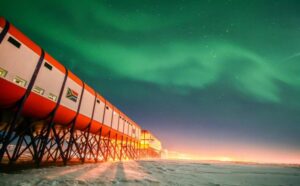 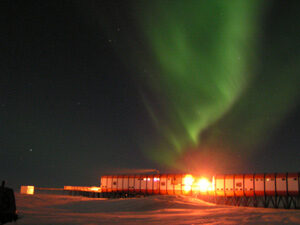 “Auroras provide direct visual evidence that the atmosphere is shielding life on Earth from the radiation hazards of space.” – Michael Kosch, SANSA.

Today Overwintering Teams are celebrating Midwinter. With this in mind we would like to share some information on Aurora Australis. The research on Auroras in SANAP would be under the jurisdiction of SANSA. Although they do not currently have an aurora program, there is a possibility of doing research on it in the future. The spectacular and beautiful auroras, usually seen at polar latitudes, are caused by high energy particles bombarding the upper-atmosphere. These particles originate from the sun and travel across the void towards Earth as the solar wind, moving at around 500 km/sec.

About 10% of the solar wind becomes trapped on the Earth’s magnetic field lines in a process called magnetic reconnection, the rest is rejected and flows past the planet into deep space. The trapped particles accumulate, but this cannot go on forever. They are eventually released into the upper-atmosphere in a process called substorms, exciting the atomic oxygen and molecular nitrogen to produce the familiar green and red colours from oxygen, and sometimes the blue colour as well from nitrogen. Charged particles, such as electrons and protons, are constrained to follow the magnetic field lines, and since the Earth’s magnetic field is similar to a dipole bar magnetic, it is only in polar regions where the magnetic field lines reach down to the ground, which is why the auroras appear mostly in polar regions.

Auroras appear in the height range 100 to 300 km above the Earth’s surface, typically with red, green and blue appearing near the top, middle and bottom, respectively, of this height range. The height of the auroras, and therefore their colour, depends on the energy of the particles, with higher energy able to penetrate to lower altitudes. Auroras are rarely seen at lower latitudes such as South Africa except during major geomagnetic storms, an example of which occurred in 1989 when auroras were visible from Durban. 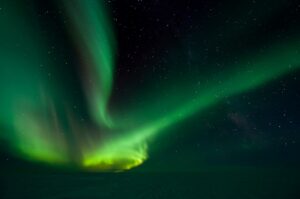 WAND auroral imager for SANAE written by  G Hough and MWJ Scourfield.
Aurorae are optical emissions excited by the collisions of charged particles with the upper atmosphere at about 100 km, the altitude of the ionospheric E-region. In fact, the ionosphere has often been likened to a giant TV screen. For the latter, the electrons are fired from an electron gun, whereas the sources of high energy electrons that cause aurorae are located in the magnetosphere. One of the central problems in space physics is locating the sources and mechanisms causing the acceleration of auroral particles. The Wide Angle No Distortion (WAND) was designed, prototype built, and tested at SANAE-3 in 1993. The unique mirror optics removed the circular distortion of standard fisheye lenses, making the image of the sky recti-linear for a fixed latitude.

Magnetospheric electrons precipitating into the atmosphere by Pieter Stoker.

Text for post provided by Michael Kosch of SANSA. Principal investigator in SANAP

Article references provide by ALSA, all articles available on repository