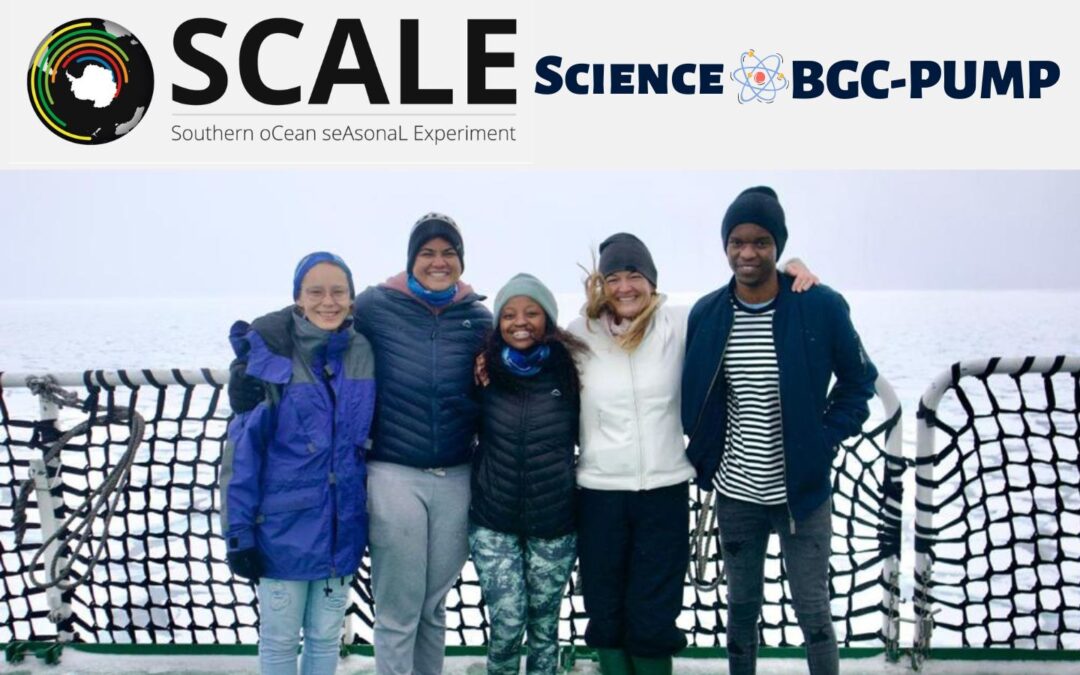 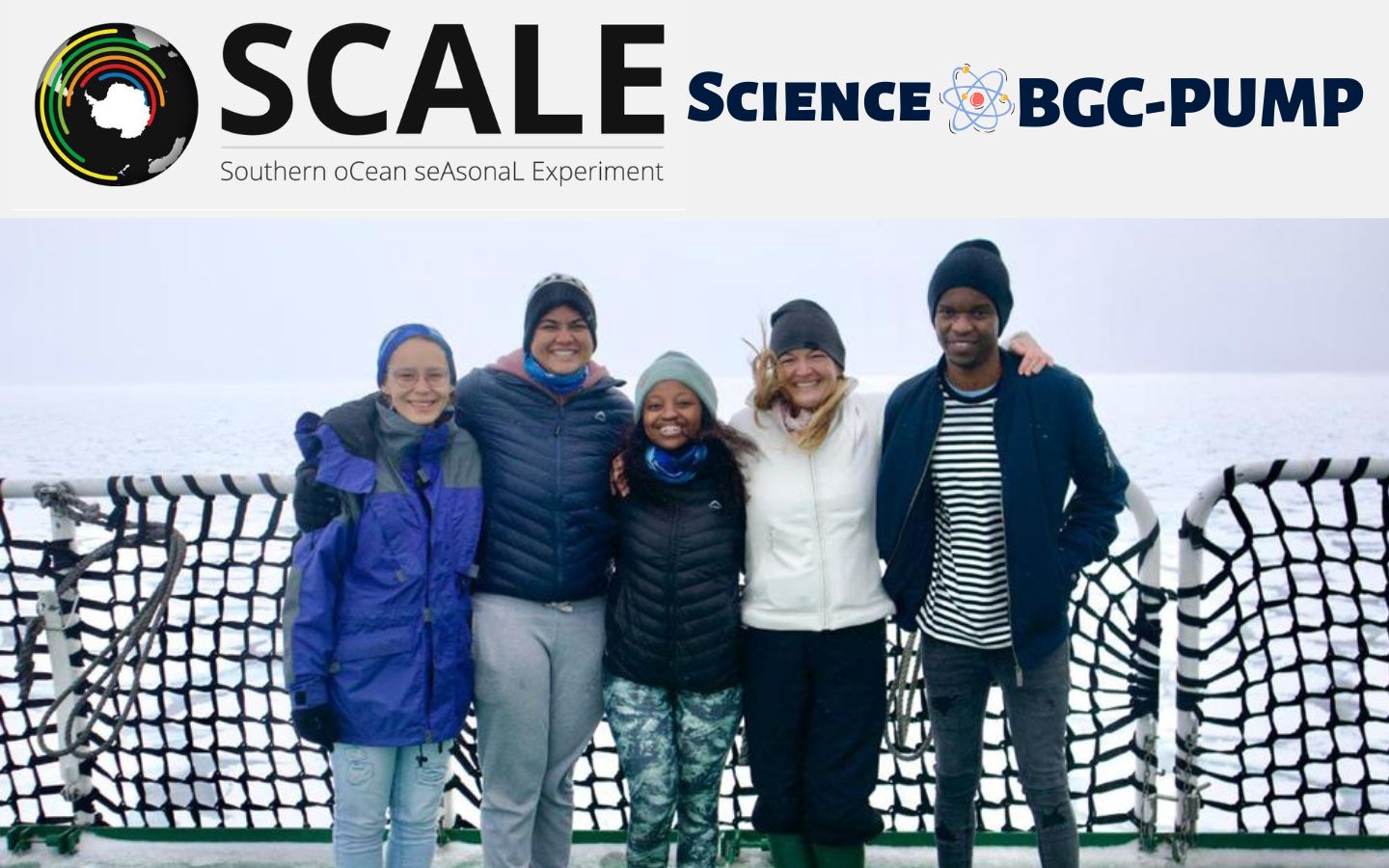 More about their research:

Phytoplankton primary production and carbon export to the deep ocean, (i.e. the biological carbon pump) are considered a major contributor to the sink of natural Carbon Dioxide (CO2) removing an estimated 3 Pg (Petagrams) of carbon from surface waters south of 30°S each year (33% of the global organic carbon flux) (Schlitzer et al., 2002).

The Southern Oceans biological carbon pump also plays an important role in regulating the supply of nutrients to thermocline waters (Subantarctic Mode Water and Intermediate Water) of the entire Southern Hemisphere and North Atlantic (Sarmiento et al., 2004), which in turn drives low latitude productivity and associated carbon export (Sigman and Boyle, 2000). As such, changes to the biological carbon pump are considered to have the potential to be one of the most important positive feedbacks on climate change (Hauck et al., 2015). Expected changes in the Earth’s climate will alter sea surface temperatures, water column stability (stratification), mixing and pH (ocean acidification), all of which will impact phytoplankton production and the effectiveness of the Southern Ocean biological carbon pump. However, the processes and dynamics that define the direction, the magnitude and the rates of change (ie: climate sensitivity) are not well understood. Part of our lack of understanding of this complex problem lies in the chronic under-sampling of the region and inappropriate parameterisation of biological processes in Earth System Models (used to predict global climate projections) that do not reflect Southern Ocean processes.

SOCCO research addresses this challenge by deriving regionally robust information from observations that allow new insight into Southern Ocean ecosystem function. This multifaceted approach aims to 1) characterise the phytoplankton population and drivers of variability of primary production and carbon export efficiency, 2) investigate the impacts of ocean acidification from a multi driver context and 3) develop and apply ocean colour algorithms for insight into a) intra-seasonal and inter-annual variability and b) long-term trends. Understanding gained from this research provides the basis for revised model parameterisations of Earth System Models to better represent Southern Ocean processes for improved climate projections.

What is currently being done on the SCALE Winter cruise:

In addition, our group is carrying out four different sets of experiments that investigate various aspects of the role of the biological carbon pump. The first carried out by PhD student Attang Biyela examines the combined effects of temperature and ocean acidification on phytoplankton primary production, nutrient uptake, physiology, and community structure through a series of multiple driver manipulation incubation experiments that simulate projected temperature and pH conditions.

The second set of experiments carried out by MSc student Lillina Ruiters uses a chlorophyll fluorescence technique (termed fast repetition rate fluorometry – frrf) to estimate rates of primary production through the derivation of electron transport rates as a measure of photosynthetic capacity. Her study then uses a statistical approach to investigate the uncertainties that result from various mathematical models to derive rates of primary production and the dominant ecological drivers of variability in key photophysiological parameters.

The third set of experiments carried out by team leader Lisl Lain and MSc Student Sifiso Mpapane looks at the optical effects of photoacclimation and iron limitation on phytoplankton inherent optical properties (IOP’s) in order to better interpret satellite radiometry and optimise the retrieval of phytoplankton optical properties and hence biogeochemical quantities from satellite. These responses are frequently characterised by an increase in cellular chlorophyll, which can lead to an overestimate of biomass by satellites, and has consequences for our understanding of chlorophyll-a concentration as a proxy for biomass and hence carbon retrievals. 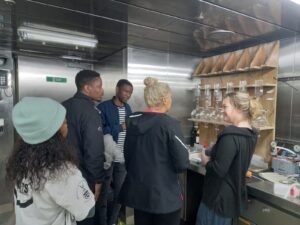 Team leader Dr Lisl Lain (far right) with the filtration set up for routine measurements that characterise the phytoplankton population.

Finally, the fourth experiment carried out by PhD student Annicia Naicker collected sinking organic particles (termed marine snow) at different depths in the water column in order to develop a better understanding of the role of particle size, ballasting and the activity of microbes in dictating the drivers of efficiency of the biological carbon pump in the Southern Ocean. 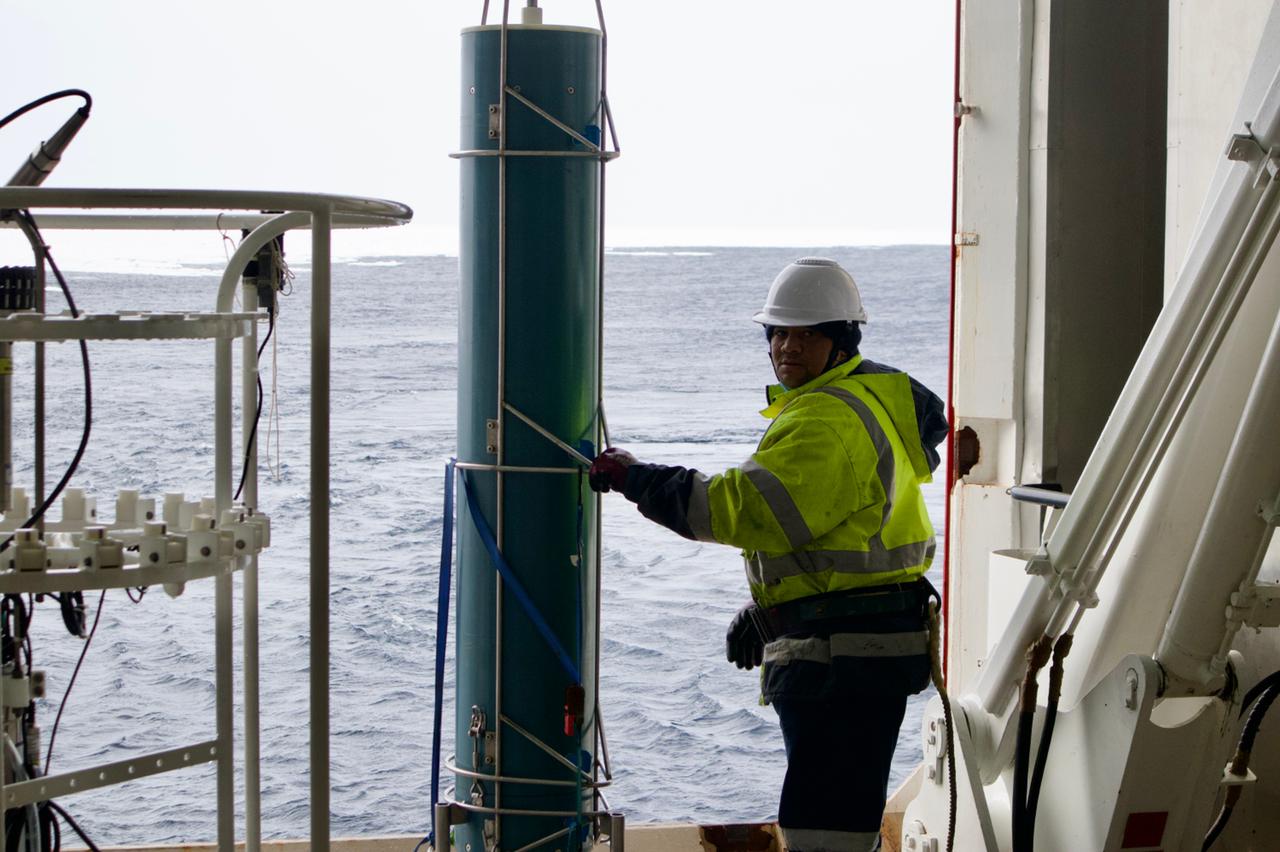 Deployment of the Marine Snow Catcher for collecting suspended and sinking organic material. 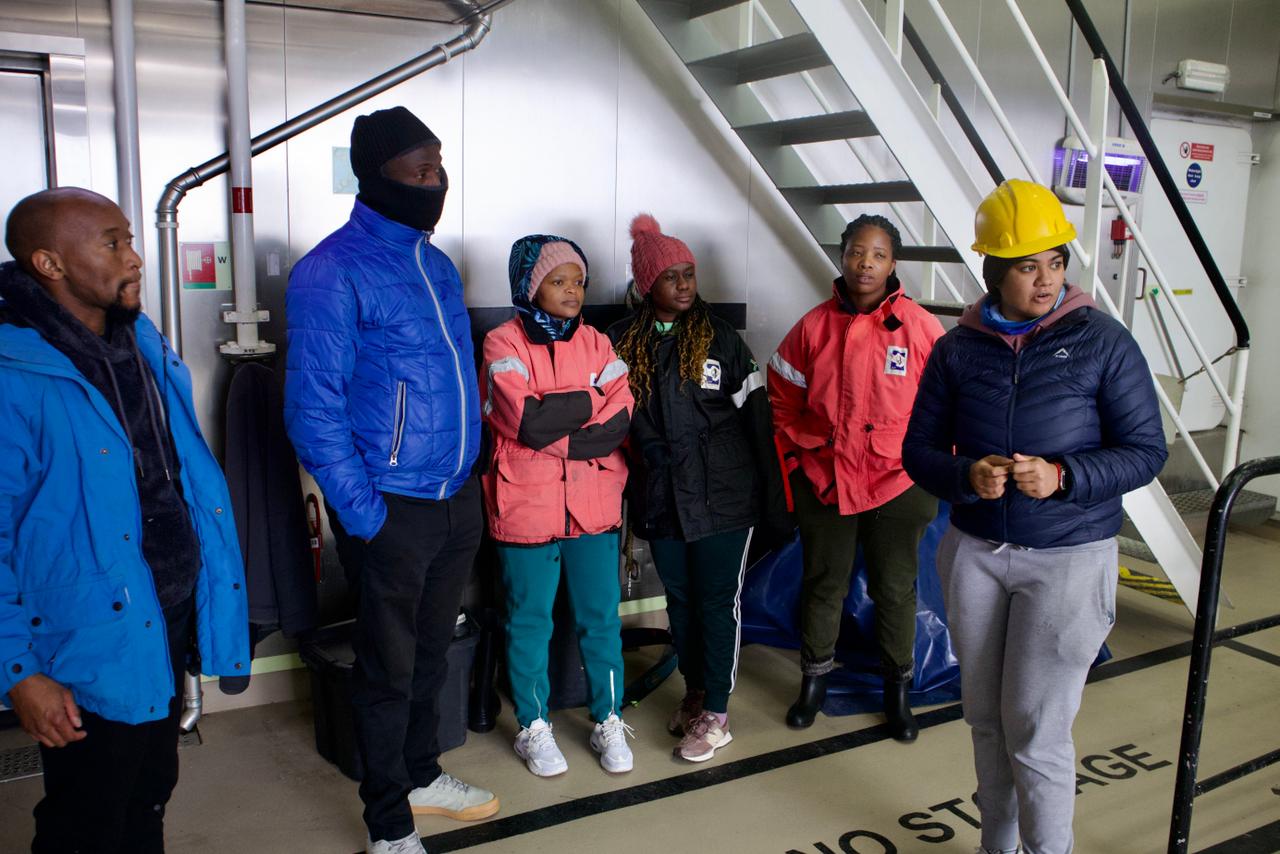 Annicia explaing the use of the snow catcher to the SAPRI Trainees. 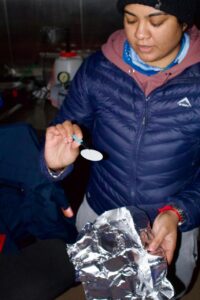 Together these various approaches will help improve our understanding of the complex and vital role of the Southern Ocean biological carbon pump in regulating global climate both now and in the future.