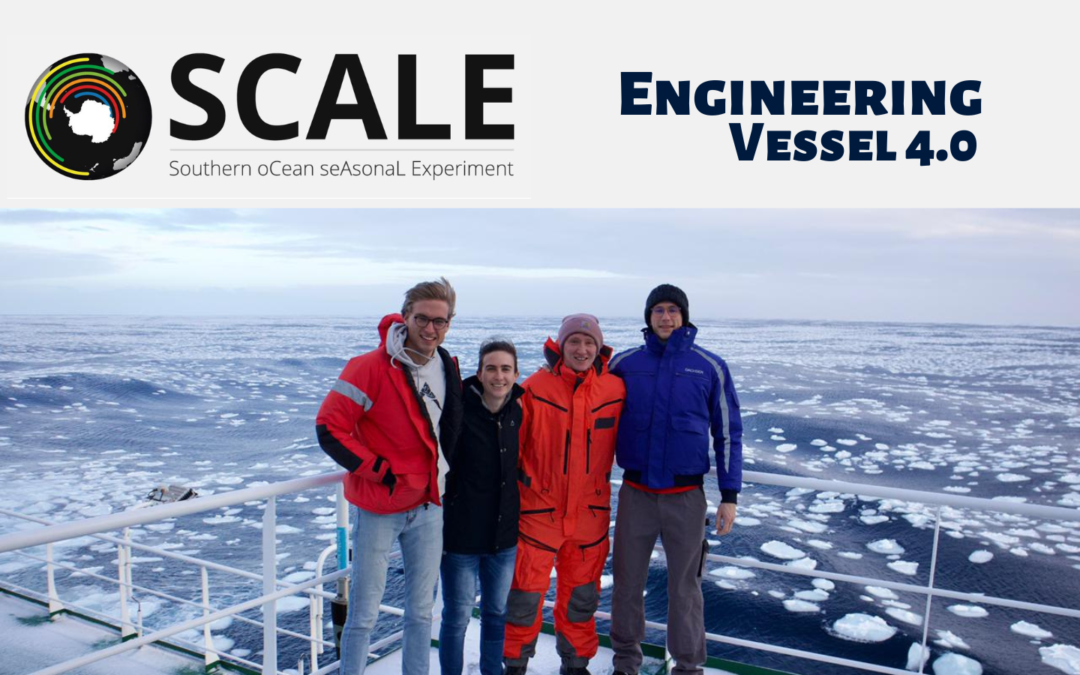 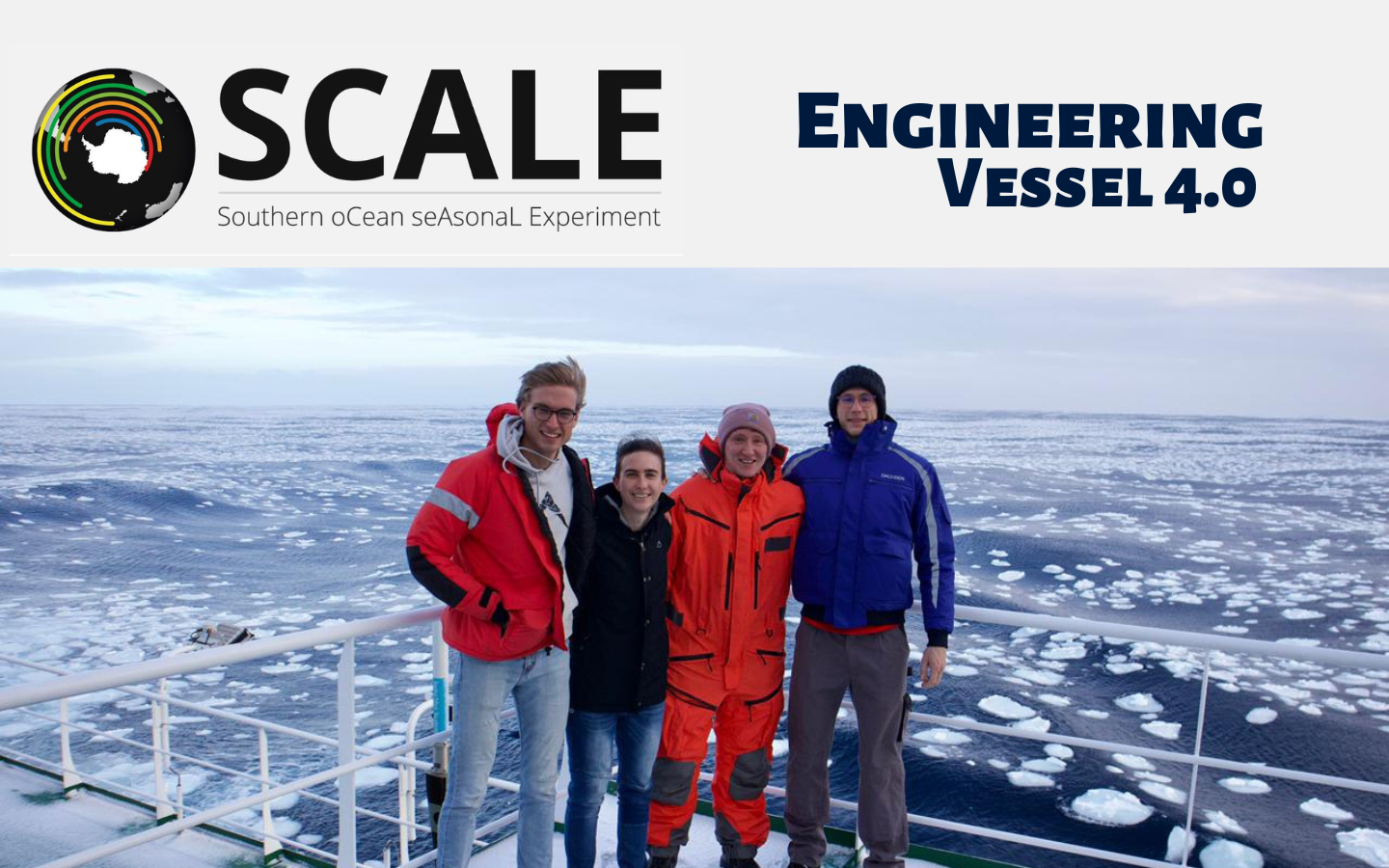 More about the team and the project:

Nicole and Christof of the Sound and Vibration Research Group of Stellenbosch University, in collaboration with Markus of the HealthProp consortium and Marek of Aalto University, comprise the Vessel 4.0 team. The aim of Team Vessel 4.0 is to investigate the responses of the S.A. Agulhas II as she travels through open water and sea ice during SCALE Winter Cruise 2022.

The S.A. Agulhas II is instrumented with a multitude of sensors, like accelerometers and strain gauges. These sensors function like an internal nervous system, enabling the Vessel 4.0 team to “sense” each vibration and motion of the ship as she breaks through waves and sea ice. So far, the S.A. Agulhas II has had to endure repeated “belly-flops” as she slams into incoming waves (see image below), as well as noteworthy rolling and pitching motions as she climbs and descends large swells on her journey through the Southern Ocean. 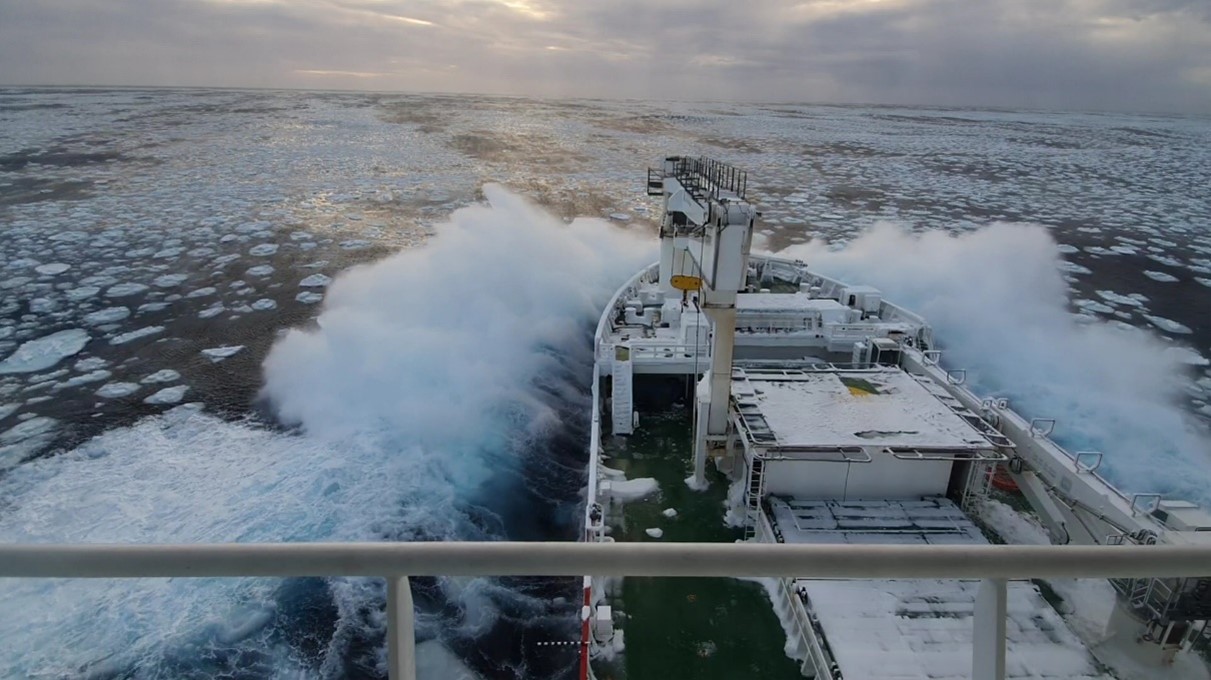 The S.A. Agulhas II in a bow slam while in the marginal ice zone (MIZ). Photo Credit: Nicole Taylor.

The team is particularly interested in studying the loads that the ice and waves cause to the hull and propulsion system of the ship. They perform engineering analyses of measurements from the hull and propulsion system to understand how intensively the Southern Ocean and its sea ice require the S.A. Agulhas II to work while navigating through winter conditions. In the image below (left), Markus is shown monitoring his measurement system located in the shaft line. 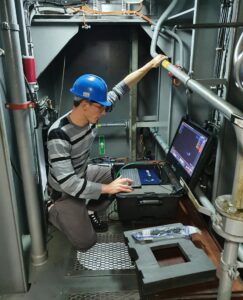 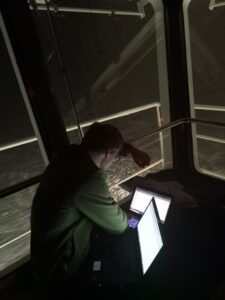 Additionally, the team is performing visual observations of the sea and ice state around the S.A. Agulhas II throughout the time of the cruise. It helps to record details about the environment that the ship encounters so that the team members have a clearer picture of what the installed nervous system is sensing. Team members spend hours being the “eyes” of the nervous system, writing down metrics like what the wave height and the direction of the main wave train is when in open water, or, when in ice, how thick the ice is and what type of ice the ship is breaking through. Christof is shown seated in the bridge while recording the sea ice conditions in the image above (right). The ice observations are done 24/7 while they are in the marginal ice zone with spotlights on during the night.

The team also uses other instruments, like cameras and lasers, to take measurements and snapshots of the ship’s environment. These really help when working through the measurements and visual observations back in the office after the cruise to understand what happened on board. In the image below Marek, Nicole and Christof are shown in the process of installing an ice thickness measurement system at the bow of the ship. 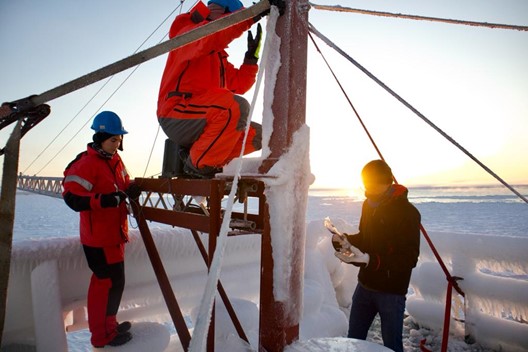 Along with carefully studying the ship and the environment she interacts with, the team has recruited passengers to participate in their human response research to better understand how people experience living and working on board. During Winter Cruise, the team has distributed custom-developed human-centric software in conjunction with more traditional questionnaires. Through the Mariner 4.0 mobile application and daily diary booklets, participants are equipped to record their daily perception of vibration, noise and motion that may cause them discomfort or illness. The Mariner 4.0 application enables real-time data capturing and analysis on board that has a greater aim to support monitoring and managing of human activities. For example, this could be used to assist with planning research on board and navigation decisions to maximize the time during which researchers are estimated to be the least motion sick and able to work well.

Read more about the research that Team Vessel 4.0 team members are part of: